Because many carpenters and woodworkers carry their miter saws to and from job sites, manufacturers have designed the saws to be safely and easily transported to various locations. Most tools come with two different locks which keep the various pieces in place while it’s being moved and help you to keep the saw aligned between uses. The first lock, which is located at the back of the tool, controls the blade’s up and down movement while the angled movements are controlled by the second lock, located on the front side of the saw arm.

When you fold the saw to transport it, many saws will automatically lock into position to make carrying easier and safer. So, what do you do if when you arrive and you don’t know how to undo the locks? Luckily for you, it’s a quick and easy process that is standardized on many different miter saws.

The lock is comprised of a knob and a pin. Knobs are located at the end of the pin and are used to release the lock. Generally by pushing or pulling the knob you can successfully adjust the lock. The model of the miter saw that you are using will determine whether you will twist the knob or not in order to release or lock the blade.

However, in most miter saw, the blade lock knob is pulled outward or pushed inward in order to lock or release the blade. When the pin is released, the blade will be lifted up automatically. The guard covers the blade, making it safe to open at any point. If the blade is not covered by the guard as it lifts, it means that the guard is stuck or dirty. It has to be cleaned so that it will freely move with the blade.

The angles are controlled by two locks on the saw’s front. The blade’s left-to-right swivel action is locked by the large, horizontal knurled knob while the presets for ordinary angles are locked by the lever underneath the knob. The lever may be located near the knob but the location differs from model to model. Regardless of the position, the mode of operation is the same. The lever and knob operate simultaneously in order to lock at various degrees. 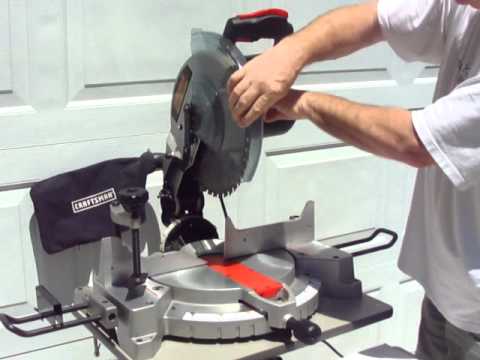 Unlocking the blade and angle locks.

To unlock the blade’s side-to-side swivel action, you have to twist the knurled knob. If you loosen the knob, the miter saw will become unlocked and if you tighten it, then it will be locked in place. You can release the preset angle lock by depressing the lever using the middle or index finger. The lever is spring loaded, so you should apply mild force in order to depress the lever slowly.

Many preset angle locks are built into the saw. Whereas the large knob unlocks the blade to free it for use and movement, the small lever is used to lock in various angles of miter cuts and to adjust the angle of the blade for transportation. You can adjust between the preset lock angles by simply depressing the lever and rotating it to a preset stop or you can release the lever at any point to place the saw at a custom angle for cutting.

Bevel angle locks do not hold consistent between each model of miter saw, especially as they are not all capable of beveling. However, those that do have the beveling feature usually operate with a spring-loaded lever or a pin to keep the bevel locked. You either press the lever and hold it down, releasing when you have come to the desired angle, or you operate the pin lock to do the same.

Bevels also come with a lot of preset lock stops at the most commonly used angles, but you can avoid these by simply releasing the lock mechanism over the angle you want to bevel at.


Miter saw locks may look a bit daunting at first, but they are fairly easy to use and to unlock when needed. The locks are a necessary part of safely transporting the saws to other locations, and they will help you to keep your saw in great condition for years to come. This makes learning your locks a necessary part of using and owning a miter saw!

9 thoughts on “How to Unlock a Miter Saw”